Vitamin B-12: Essential for Peak Athletic Performance and Mental Attitude

The vast majority of Americans normally get their Vitamin B-12 from meats, fish and shellfish. Though claimed to be present in various seaweeds and algae, it has not been clearly established as to whether that form can be utilized. 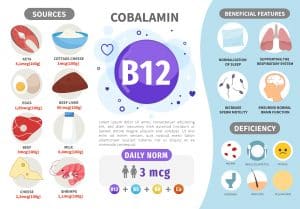 According to a fairly recent Gallup Poll (July 26, 2012) about 5 percent of the population are vegetarians and 2 percent are vegan. While there are no reliable data as to the percentage of athletes who are vegetarian, we do know that among younger, college-educated men and women the vegetarian percentage may be as high as 7 percent.

For athletes who are vegetarian or vegan, a B12 supplement is strongly recommended. B vitamins are excreted through urination; they are not stored by the body. In fact the benefits of vitamin B12, also known as cobalamin, include its essential function in brain and nerve tissue health and for the formation of healthy blood cells. 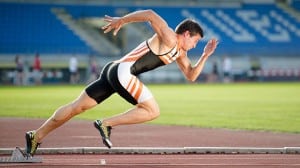 Benefits of Vitamin B12: Mental Attitude, Well-Being and Brain Health

The link between the benefits of vitamin B12 and nervous system functioning has been long-established. For example, researchers have studied the vitamin B12 supplement benefits in prevention of brain atrophy and Alzheimer’s disease.[i] There appears to be diminished B-12 in elderly patients with dementia in addition to brain shrinkage. Benefits of B12 supplements of importance in regard to elderly patients are that the USDA and National Academy of Sciences recommend a higher B12 RDA in the elderly due to changes in the ability of our bodies to use the vitamin as we age:

“The RDA [Recommended Daily Allowance] for adults is 2.4 μg/day] of vitamin B12. Because 10 to 30 percent of older people may be unable to absorb naturally occurring vitamin B12, it is advisable for those older than 50 years to meet their RDA mainly by consuming foods fortified with vitamin B12 or a vitamin B12-containing supplement.”

Before we move on, it is interesting to note what the report considered as “elderly!” There are thousands of Master’s and Senior athletes who are competing well into their 80s and even 90s; how many of these athlete’s are getting insufficient B-12?

While most people with B-12 deficiencies are not suffering from brain atrophy, there is strong scientific evidence that sub-optimal levels affect mental health and attitude. For example, in 2001 a study was published entitled: “Cobalamin-responsive psychosis as the sole manifestation of vitamin B12 deficiency,” where psychotic episodes where reported stemming from depleted B-12.[ii]

In an online article posted on January 10, 2013 on Harvard Health Publications entitled: “Vitamin B12 deficiency can be sneaky, harmful,” it was stated:

“…a severe vitamin B12 deficiency can lead to deep depression, paranoia and delusions, memory loss, incontinence, loss of taste and smell.”

The scientific journal, the American Journal of Clinical Nutrition (December 2008) in a study by Kang and associates entitled: “A trial of B vitamins and cognitive function among women at high risk of cardiovascular disease,” concluded that B-12 did not delay mental declines in women with cardio-vascular disease, but “The possible cognitive benefits of supplementation among women with a low dietary intake of B vitamins warrant further study.”

Older adults need a higher RDA of vitamin B12 as was determined in a national study of nutrition.

Indeed, the National Health and Nutrition Examination Survey estimated that “…3.2% of adults over age 50 have a seriously low B12 level, and up to 20% may have a borderline deficiency.”

Athletes who report working out harder and harder, but feeling worse and worse, i.e., “Burnout,” may actually be complaining about symptoms of a B-12 deficiency.

Obviously, B-12 deficiencies may also be affecting some much younger people and especially athletes who may or may not be vegetarian. According to the Harvard medical website the following symptoms (among many) may be part of that borderline deficiency group: difficulty walking (staggering, balance problems), anemia, difficulty thinking and reasoning (cognitive difficulties), or memory loss; paranoia or hallucinations, weakness and fatigue.

No matter the level of fitness an athlete who complains of feeling tired and weak may be served by the benefits of Vitamin B 12 supplements, and could also discover Peruvian maca root for additional energy. In addition to lower B-12 causing anemia, we cannot forget brain and nervous system health as part of the overall equation that a B12 supplement can fix.

The Mayo Clinic website recommends the following vitamin B12 RDA levels for B12 supplements in adults:

"We used Superior mfg to create a custom formulation for a new product line we were developing and were very pleased. Very honest company with great knowledge of the industry. Thank you guys!"

"I received our product today and everything looks great. Labels came out perfect and look great on the bottles! It was an incredible experience working with you guys, you answer your phones and your reps know their stuff. Thank you."

"Superior is one of the few companies we've worked with that answer their phone every time and provide truly superior customer service and value. We hope to have a long relationship with you."

Message Us
Get a quote. Ask a question. Or schedule a Free Consultation.