Vitamin B6 and Its Role in Athletic Performance

Research has uncovered many important discoveries in regard to athletes, nutrition and vitamins in the past decade alone. While athletes typify a certain fitness ideal, many of them straddle a fine line between being in great shape, poor eating habits and being vitamin deficient. This is particularly true in regard to the “B vitamins.”

In a summary article appearing in Science Daily (December 27, 2006)[i],[ii] based on research by the University of Oregon and entitled: “Poor Athletic Performance Linked To Vitamin Deficiency,” the authors found:

“Active individuals lacking in B-vitamins — including college athletes and other elite competitors — may perform worse during high-intensity exercise and have a decreased ability to repair and build muscle than counterparts with nutrient-rich diets, a new study concludes.” 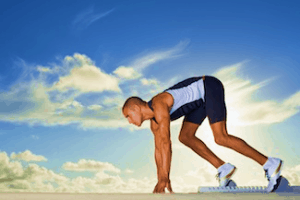 The University of Oregon Study again confirmed a piece of research[iii] conducted in 1991 by van der Beek that found:

“Vitamin deficiencies can certainly impair exercise performance. A daily intake of less than one-third of the RDA for several of the B vitamins (B1, B2 and B6) and vitamin C, even when other vitamins are supplemented in the diet, may lead to a significant decrease in VO2max and the anaerobic threshold in less than four weeks.”

Vitamin B6 Function: The Winning Attitude

As athletes burn greater amounts of calories, hydrate to a greater degree and subsequently sweat and urinate fluids, water soluble vitamins such as vitamin B6 leave the body.

Of the B vitamins, unlike B12 or B1, (Pyridoxine) vitamin B6 function’s  are not as widely known and yet vitamin B6 supplementation may play a particularly significant role in athletic performance and even the “performance mentality” of athletes. Although most references to vitamin B6 function tell us that in normal diets B6 deficiencies are rare, in athletes where diets are limited and large amounts of calories are burned, deficiencies in the amount and functions of vitamin B6 may be present and thus require a vitamin B6 supplement.

For example, the National Institutes of Health Guidelines (reviewed September 15, 2011), point to Vitamin B6 supplement deficiencies as leading to: “…anemia, itchy rashes…depression, confusion, and a weak immune system.”

As quoted in Everyday Health, an online publication, Nutritionist Dee Sandquist, MS, RD, CD, a spokesperson for the American Dietetic Association states that the function of vitamin B6: “Is important for cardiovascular, digestive, immune, muscular, and nervous system function. The B6 vitamin is needed for proper brain development and function and to make the hormones serotonin and norepinephrine, which affect mood…”

Numerous articles have been written about depression in athletes. In a 2013 study reported in the prestigious Clinical Journal of Sport Medicine[iv] entitled: “The prevalence of failure-based depression among elite athletes,” swimmers (not hockey or football players) were tested for depression. The study concluded:

“The findings suggest that the prevalence of depression among elite athletes is higher than what has been previously reported in the literature. Being ranked among the very elite athletes is related to an increase in susceptibility to depression, particularly in relation to a failed performance.”

While it would be irresponsible in this post to claim that depression among elite athletes may be due to not meeting the RDA of vitamin B6, there is no harm in vitamin B6 supplements in athletic diets – at any level of performance with a B 6 supplement to help athletes maintain a positive mental outlook.

An article in The Daily Beast (February 3, 2014) entitled: “Are Female Long-Distance Runners More Prone To Suicidal Depression?” the article states many facts that may contribute to depressed athletes and that, “Stories of eating disorders abound.”

The point here is that athletes (even middle of the pack athletes like us) get depressed. Despite stories about “runner’s high,” poor diets and a lack of B vitamins may be a contributing factor. There are many things athletes at any level of competition can do to feel better about themselves and their performance. Vitamin B 6 supplement may prove of benefit especially when nutrition is poor and endurance is pushed.