Vitamin D or Cholecalciferol is synthesized in our skin. While whole exposure as brief as 30 minutes has been shown to benefit mammals[i] humans not only are covered, but many spend large amounts of time under artificial light in office buildings (especially in winter). In addition, the very mechanism of sunlight on skin that our bodies crave has now become another fear factor. In a 2011 review by the U.S. Institute of Medicine,[ii] it has been shown that sunscreen with an SPF factor of only 15 can reduce Vitamin D metabolism by 98 percent. In other words, an individual who is covered and who has applied a high sunscreen factor is manufacturing virtually no Cholecalciferol.

Food products such as milk have long been fortified with Vitamin D. However here is another area where lifestyle changes have also occurred. According to the USDA, in a May 2013 report entitled: “Why Are Americans Consuming Less Fluid Milk? A Look at Generational Differences in Intake Frequency,” the study summarizes: 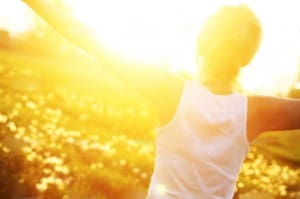 In a report put out by the National Cancer Institute, it was stated:

“Although the average dietary intakes of vitamin D in the United States are below guideline levels, data from the National Health and Nutrition Examination Survey revealed that more than 80 percent of Americans had adequate vitamin D levels in their blood.”

What about those who don’t get enough Vitamin D either through poor diet or lack of sunshine or other factors? Sometimes those who strive for health the most are likely to be candidates for Vitamin D deficiencies, including vegetarians and or those who participate in heavy exercise and who also avoid dairy or other products that are supplemented with Cholecalciferol?

The benefits of Vitamin D supplements have been shown to play a strong role in athletic performance. In a 2010 research study[iii] by Gupta, et.al., Vitamin D when part of an overall supplementation regimen with Calcium had a positive effect on muscle strength and muscle function.

Not surprisingly, athletes who spend a great deal of time indoors such as swimmers, basketball, hockey, volleyball players and wrestlers may suffer from Vitamin D deficiencies and could find many benefits of a vitamin D supplement.[iv]

In addition, a 2013 study by J.F. Chaba entitled: “Cholecalciferol (Vitamin D3) Improves Myelination and Recovery after Nerve Injury,” suggests that recovery from nerve damage is one of the benefits of vitamin D supplement intake by athletes. As athletes are prone to muscle tears and nerve damage, supplementation may well be recommended.

In summary, we see a population now protecting themselves from the sun as never before, eating foods and drinking beverages low in Vitamin D and yet expecting that their “healthy lifestyles” will also yield ever higher levels of athletic performance. In truth, Vitamin D importance and their deficiencies may be holding them back.

Vitamin D is supplemented as a liquid, in gel capsules and in tablets. Dosages are variable and range from 400 IU (International Units) to 10,000 IU. The general consensus is 2,000 IU daily. However, the Mayo Clinic and WebMD state: The new 2010 recommended daily allowance (RDA) is 600 IU for those 1-70 years of age and pregnant or breastfeeding women, and 800 IU for those over 71 years of age.” Nevertheless, other ranges show higher intakes for disease prevention.