Yacon: A Sweetener with Untapped Potential

Yacon, a plant with the Latin name of Smallanthus sonchifoliais, is naturally found in the Andes. It is closely related to sunflowers, and its leaves and small yellow and orange flowers are reminiscent of wild sunflowers as well. The plant has large bulbous roots which are about 70 percent water. Interestingly, on a dry weight basis, the yacon root is about 24 percent protein.

However what is remarkable about Yacon is the extract from its root system. Yacon root extract produces a natural plant sweetener that is highly prized by diabetics and athletes who are naturally trying to maintain weight through the use of alternate sweeteners

In a 2003 literature review of Yacon root[i] it is shown that:

“The tuberous roots of yacon have a sweet taste and because the human body is not able to metabolize the fructo-oligosaccharides, yacon does not put on body weight. Large tuberous roots similar in appearance to sweet potatoes have a much sweeter taste and crunchy flesh. Yacon sweetness is caused by fructose, which is by some 70% sweeter than table sugar and does not stimulate insulin production and does not bring a glycaemic reaction.” 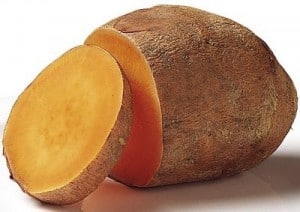 “An average American consumes more than fifty pounds of artificial sweeteners per year, which is a 300 percent increase since 1965.”

More serious, along with the increased consumption in artificial sweeteners has come the drumbeat of studies linking artificial sweeteners with grim increases in disease conditions. For example in a 2012 study in the American Journal of Clinical Nutrition,[ii] researchers were attempting to determine if any linkage occurred between diet soft drinks, stroke and heart disease. The conclusion of the study of nearly 40,000 participants stated: “Soft drink intake is associated with higher risk of ischemic stroke for women.”

In the publication, Trends in Endocrinology & Metabolism it is stated[iii]:

“Over nutrition and increased food consumption especially of high calorie foods with little nutritional value leads to excessive weight gain and obesity. Indeed, according to the CDC, approximately 35.7% of adults, and 17% of children and adolescents were obese in 2008, and this was associated with $147 billion in medical expenses, in the USA alone.”

The study goes on to explain the complex association between what our brain believes when presented with foods artificially sweetened. On many levels artificial sweeteners are stimulating us to eat more, rather than curbing our appetites.