The number of Americans taking anti-cholesterol medications[i] has increased from a low of just 5 percent in 1976 to 23 percent in 2010. It is admirable that people are trying to do something about their cholesterol problem, but there is confusion as to the safety of prescription medications.

For example, the Mayo Clinic warns[ii] that statins taken for high cholesterol can cause serious side effects including muscle damage, digestive problems, an increased risk of type 2 diabetes, memory loss, confusion and liver damage. Many patients on anti-cholesterol drugs are required to have blood tests to determine that their liver function is normal. One of the groups who frequently go on these medications is adults in their 60s; the group likely to have adverse reactions to statins. 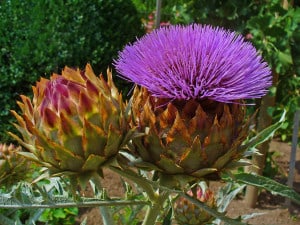 Not by diet alone

Though patients often try to lower cholesterol through diet and exercise alone, researchers have concluded that the results of these efforts may not be so “dramatic.” In a study by Robert L. Rosenthal, M.D.[iii] several diets and exercise regimens were reviewed. According to the paper, diet offers only marginal results, while diet and exercise offers somewhat better outcome.

The problems are that most low-cholesterol diets are difficult to adhere to, and not everyone with high levels of bad cholesterol (LDL) has the ability rigorously exercise. For confirmed cardiac patients with high cholesterol, physicians almost always recommend an anti-cholesterol medication.

Artichoke supplement also seems effective for stomach problems, cramps and bloating and some studies even point to artichoke extract in IBS as being an effective cure.[v]

Specific, scientific studies continue to reinforce artichoke leaf extract (ALE) as a cholesterol lowering alternative to prescription drugs.[vi] In 2008 the journal Phytomedicine reported the cholesterol lowering abilities of the artichoke supplement in a rigorous study on adult subjects and in a 2013 review entitled: “Artichoke leaf extract for treating high cholesterol levels” [vii] the conclusion was: “There is an indication that ALE has potential in lowering cholesterol levels…but the limited data on safety suggest only mild, transient and infrequent adverse events with the short term use of ALE.”

This ancient treatment for “stomach problems,” now being seriously studied for its cholesterol reducing uses has virtually none of the side effects of statins. That alone, makes the artichoke extract supplement a powerful alternative to cholesterol medications.

Dosage
In the 2008 study referenced above, a daily dosage of artichoke extract for high cholesterol of 1,280mg was used. In a 2013 study in the International Journal of Food Science entitled: “Beneficial effects of artichoke leaf extract supplementation on increasing HDL-cholesterol in subjects with primary mild hypercholesterolaemia: a double-blind, randomized, placebo-controlled trial,” the dosage was 500 mg. per day.

For artichoke supplement in and of itself or in conjunction with supplements for cardiovascular health, Artichoke Leaf Extract is a promising option and a much needed addition to any line of products.