Butterbur has nothing to do with butter or anything “dairy.” It is a shrub found mainly in marshlands and ditches in Europe. In ancient times, folk medicine recommended the large green leaves of the plant for pain, headache, anxiety, coughs and nasal allergies. There has recently been interest in Butterbur extract in allergies and migraine sufferers.

We need to first look very briefly at the allergy drugs market to understand why Butterbur extract has been gaining attention.

According to Global Industry Analysts, an organization that tracks pharmaceutical trends, in a release issued on February 18, 2010:

“The US market for allergy drugs is projected to exceed $14.7 billion by the year 2015. This is primarily driven by a continued rise in the number of patients suffering from allergies, including children; an aging population; and availability of a wide range of medicines… over-the-counter in pharmacies and drugs stores.” 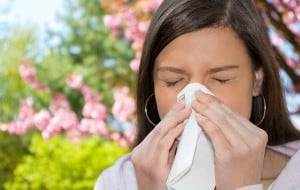 The market for allergy drugs in huge however, there are problems. Because a medication is sold over-the-counter, allergy medicines can cause severe reactions. According to WebMD, drugs such as Benadryl can cause drowsiness, dizziness, constipation, stomach upset, blurred vision, or dry mouth, nose and throat. Allergy drugs can also cause rashes, impaired thinking and  anxiety.

There are, of course, a “newer generation” of OTC allergy medications, but they too can have side effects. The website RxList shows that Loratadine (Claritin) may cause fast or uneven heart rate; feeling like you might pass out; jaundice (yellowing of your skin or eyes); or seizures (convulsions) along with drowsiness and headache.

Two important questions must come to mind; are the risks of taking over-the-counter chemicals always worth the symptoms they cause? If a hay fever sufferer has “itchy eyes,” and she must drive somewhere, is it worth it to take a drug that might make her fall asleep behind the wheel? We think not. The logical question is if there are gentler alternatives to allergy medications worth trying? Here is where Butterbur for allergies has shown promise.

Under the banner of the (U.S.) National Institute of Health, is the prestigious National Center for Complementary and Alternative Medicine (NCCAM). The purpose of this organization is to explore and re-examine alternative medications that might be used for modern disease problems.

It is important to note that only purified Butterbur extract or Petadolex has ever been used for evaluation. The raw leaf contains alkaloids that must always be removed.

According to the NCCAM:

“An NCCAM-funded literature review reports that in a clinical trial of 125 participants, Butterbur was just as effective as a commonly used oral antihistamine for allergy symptoms such as itchy eyes.”

Another point the study on Butterbur and allergies makes is that:

“There is some evidence that Butterbur extract can decrease the symptoms associated with nasal allergies.”

In an impressive 2006 study[iii] that tested Butterbur for allergies against Allegra for its hay fever effectiveness, showed that:  “Butterbur and fexofenadine (Allegra) were equally effective, and both were more effective than placebo.”

According to the NYU Langone Medical Center, “The usual dosage of Butterbur is 50-75 mg twice daily of a standardized extract that has been processed to remove potentially dangerous chemicals called pyrrolizidine alkaloids.”

When the purified extract is used in formulation, Butterbur for allergies shows itself to be effective, natural and an important alternative to OTC drugs. Butterbur extract is a promising, natural treatment for allergies with none of the drowsy side-effects.